The last term of Year 6 and Northborough Primary School is a busy but also very exciting time.

Once again Year 6 have produced some fantastic pieces of artwork, which we have entered in the annual Rotary Club Art competition. This year the children created brilliant collages representing Henry VIII or one of his six wives. They are currently displayed in the Market Deeping Tesco store. 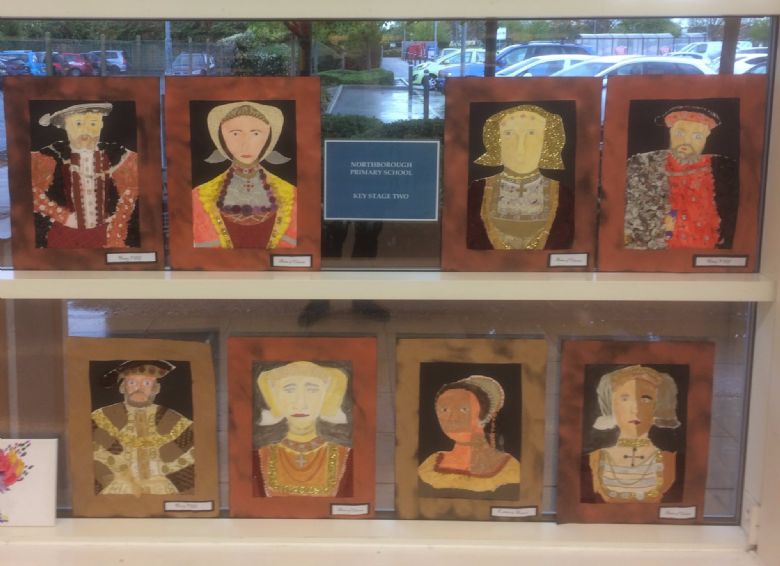 We are pleased to announce that Northborough Primary School has won the overall school competition, with Lilley's entry achieving second place overall.

"The judges were most impressed by the quality of entries this year, which was probably as high as we have ever had. Once again thank you for your support." John Lavery, Rotary Club of the Deepings

In Year 6 we have found out about Tudor theatre and the life and works of William Shakespeare. Our end of Year 6 production will be a funny and exciting musical interpretation of The Tempest.

This story takes place on a mysterious island in the middle of nowhere. The main inhabitants of the island are Prospero and his daughter Miranda. The other inhabitants of the island are Caliban, Prospero’s slave, and many magical spirits. Prospero is a powerful sorcerer who has lived on the island ever since his brother, Antonio, stole his dukedom. Luckily, with the help of his friend Gonzalo, Prospero and Miranda were able to escape alive. They have been shipwrecked on the island for twelve years.

The first performance of The Tempest on record was at court on All Hallows’ Day in November 1611. Our latest production was performed on Thursday 13th July 2017.

And what an hour it was!

As we waited for the final performance of our children, we were greeted by Mr Mallot with pictures of their first taste of fame.  On paper it looked perfect; the costumes were lavish, the props professional, the still life poses were telling a tale; but in person it exceeded all expectations.

We were ushered into the room surrounded by a buzz of excitement.  The stage was big, the chairs were roomy and we looked onto beautifully designed lettering spelling the name of the play; The Tempest.

The opening scene immediately captured the attention of the audience with a crash of thunder and the booming voice of the ship’s Captain, Bosun and the Sailors.  The whole cast were believable from the start with superb and timely sound effects throughout.  The lighting captured the mood of every scene and blackouts between each part were professionally managed.

The play was full of music from booming, hearty foot-tappers to angelic, emotive singing.  The dancing evoked joy and was wonderfully choreographed and the comedy lines, particularly from the characters of Miranda and Ferdinand and Stephano and Trinculo, made The Tempest an all-round feast of entertainment.  The Sprites, Jaba Waba Band and The Ghouls gave the play the wow-factor.

Prospero led the cast superbly throughout, with many dazzling entrances and exits and her sidekick Ariel was the perfect accomplice.

The confident delivery from King Alonso, Antonio, Sebastian, Gonzalo and the Courtier put the audience at ease and any forgetful moments were quickly avoided by the support of the prompter who followed diligently throughout.

The technical aspects of the play were a real treat.  The additional performances from reception children as mini versions of the cast was an adorable touch and the quality of the video would give Spielberg a run for his money!

The props were a triumph adding a realistic quality to the performance as well as a memorable moment with some heads on a plate and the addition of face paints from Mrs Pell gave a sparkle of authenticity to The Bard’s work.

Finally, a fabulously funny and real show-stopping performance came from Caliban, Propsero’s Monster who never once came out of character.

The directors Mr Day, Ms Diver, Mrs Brown and Mrs Lidgett have created a true masterpiece that will never be forgotten the hearts and minds of all of the Year 6 children.  On behalf of the parents I would like to say a huge thank you for creating such wonderful memories for us to treasure in their final weeks.

The visit included: a walk up Mam Tor in the Peak district National Park; a cycle ride along the Tissington Trail; visiting Chatsworth House, Garden and farmyard; a trip to Chestnut Otter, Owl and Wildlife Park, as well as a visit to Shakespeare's hometown of Stratford upon Avon with a RSC Workshop. 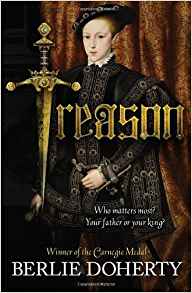 We believe that reading should be an enjoyable activity, and that one of the greatest gifts we can give a child is the ability to read.  In addition to our specific guided reading, we have 15 minutes of selected 'Reading Lighthouse' where classic novels, important to the children's appreciation of the amazing world of words and books, are read and shared.

This term we are reading Treason by Berlie Doherty

Will Montague is a page to Prince Edward, son of King Henry VIII. As the King's favourite, Will gains many enemies in Court. His enemies convince the King that Will's father has committed treason and he is thrown into Newgate Prison. Will flees Hampton Court and goes into hiding in the back streets of London. Lost and in mortal danger, he is rescued by a poor boy, Nick Drew. Together they must brave imprisonment and death as they embark on a great adventure to set Will's father free.

Our final science topics of the year will be learning around "Evolution and Inheritance" "Electricity", "Light" and "Humans and animals".

Activities to support learning can be found in the Science area of Educationcity.

All Year 6's and Teachers are invited to join us for our Leavers' Pizza Party. Don't forget your SuperSoaker!!!